Archivar - wooden scanner based on Archivist

Built a scanner? Started to build a scanner? Record your progress here. Doesn't need to be a whole scanner - triggers and other parts are fine. Commercial scanners are fine too.
Post Reply
33 posts

I don't see why the archivar shouldn't be able to scan books with tight gutters. It has a 90 degree platen, and the glass comes together right at the point of the join. Unless the join is not connected into a narrow enough point, I don't see a problem.

Your own design is also 90 degrees with a platen on one side.
Top

Actually, the platen angle is 100 degrees on the archivist and the archivar.
I as well experienced, that getting close to the gutter with a v-shaped Scanner really is a problem with some paperbacks, even when having a 90degree angle v-shaped Design.
It could be a possibility to take out one platen, scan every other page and repeat with only the second platen in place. That way you may be able to use the lift mechanism, if that would help. Altough I didn’t test that yet, i can imagine this to be quite fast.

How fast is ‚a lot slower‘ approximately? What’s the limiting factor with your scanner?

If I had the task of scanning a large number of paperbacks (small, "normally closed" books) with text near the gutter and I was going to binarize the output using something like ScanTailor, I wouldn't even use a platen. I'd build a v-shaped cradle, use two cameras and an overhead light, and then hold the pages apart with my thumbs. I'd write a post-process app that would remove the portion of the outer margin containing the image of the thumbs and replace it with the surrounding page color.

It benefits you to keep your hands on the book to hold it open during the photographing of the pages since the paperbacks are always trying to close themselves. The dual camera design means that you'll only need to turn the pages once. You won't need to worry about reflections off the glass platen surface which means you can use whatever cradle angle is comfortable for you. The pages of the books are small enough to where they should stay flat with the pressure provided by your thumbs. A foot switch to trigger the camera shutters would be necessary.

Of course, if your paperbacks also don't have much of an outer margin this may not be possible, but you won't beat this system with a scanner that uses a platen, especially if you have to use a lifting mechanism or need to flip the book over after each turn of the page.
Top

The problem with trying to get down into the gutter margin with a standard style of scanner is that the glass is generally thick enough that with a narrow gutter margin the edge of the glass on one side can cover the whole gutter margin on the other side. This can happen even if you have the edges nicely tapered and fitted so that you have a very good join.

As to how slow is 'a lot slower'. It's about half speed. I have to go through the book twice, once for the even pages and again for the odd pages. That means I have to turn each page twice, so it takes twice as long. It still is worth the extra time because the end of the line is visible in the scan. So the OCR gets the first/last word (depending on left or right page) and it doesn't take nearly as much correcting during the editing process.

For a scanner without a platen, I'm not real sure about being able to reliably hold the book open flat enough to get a good scan without getting my fingers in the way. And if you don't get it open at least far enough for the camera to see down into the gutter even ScanTailor won't help. A lot of my books have pretty stiff pages.

I have been trying to think of ways to work around the problem. I have some kind of far out concepts involving sliding the platen glass in and out to take the 2 pictures, but I can't really make it work, even in my mind, much less in reality.

For getting deep into the gutter, you might try the Impost scanner design. Or I've had pretty good results with lasers. But there is only so much you can do with fixed-angle platen scanners like the Archivar (or the Archivist or Archivist Quill for that matter).

Thanks for the suggestion on the Impost scanner. I will study up on it and see how if it would work for me.

blauer wrote: ↑30 Oct 2017, 04:52 Thanks! I am happy to hear that! Were working on everything to get ready, we move into our new workshop in November! We will tell you as soon as we accept orders! What will you be using the scanner for?

By the way, Archivar is able to to paperback-mode while still having the proper lighting! And we found another useful application for paperback-mode:
There are many children-books with thick pages, one won't be able to turn under the glass as they don't flex - no problem in paperback-mode. 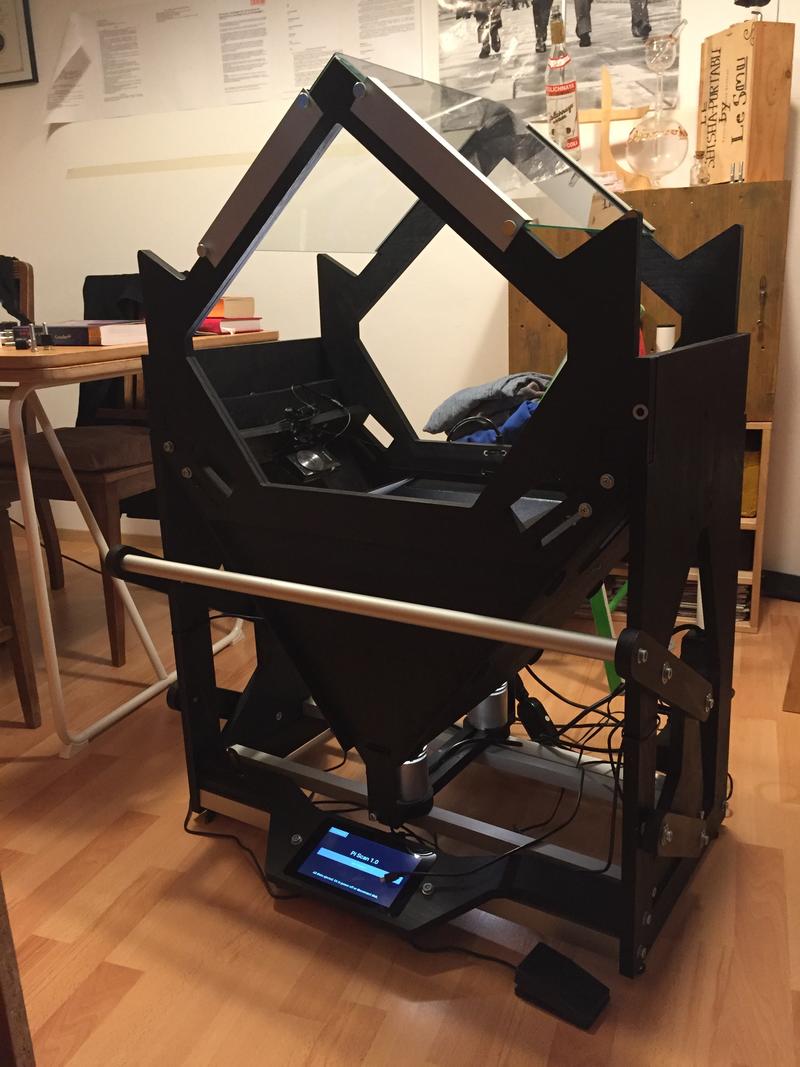 I will scan my own books as well as books borrowed from the library. I like to read e-books but not all books available in e-books in Finnish. Often, e-books are also expensive in Finland, but sometimes there are cheap deals. It would also be necessary to scan the pokers, and it would probably succeed in Archivar?

I'm kind of afraid that Archivar is too expensive for me?

It would be interesting to get more information about Archivar, Size and Price Range, and so on. Archivist and Archivar are big and complicated, albeit nicely designed. But for me, a little simpler book scanner would suffice. For example:

But the difficulty is that drawings are not available if it would be so easier to make wood parts or to put them in ...
Two cameras would be good and Pi Rasberry 2/3.

blauer wrote: ↑30 Oct 2017, 09:48 Paperback mode is, i think, a term danielreetz brought up. It was intended to help scanning paperbacks which accidentally close whenever the cradle is lowered.

One can turn the whole Image-Module upside-down to have the glass pointing upwards.
That enables you to take paperbacks and scan them face-down (kind of like a regular flatbed scanner) while holding them in your hand instead of putting them into the cradle.

That's accurate. Actually, in the early versions of the Archivist CAD, I supported paperback mode in the exact same way. I can't remember exactly why I pulled it out later, but you are probably right, I think it had to do with the lighting module design.
Fast prototyping and shop tips videos from Daniel on YouTube.
Top

Matteus wrote:I'm kind of afraid that Archivar is too expensive for me?

Matteus! I am sure we can find a deal for example just the wood parts, thats affordable for you. We also build prototypes and scanners to show on faires every now and then, which we sell very cheap. Just send me a PM!


Matteus wrote: ↑03 Nov 2017, 18:06It would also be necessary to scan the pokers, and it would probably succeed in Archivar?

What do you mean by "pokers"? Playing Cards for Poker?

We don't have the webpage finished and we also don't have drawings ready - very sorry! We are changing stuff everyday, and are still not completely satisfied with some details.
We really want to keep the complexity and thereby the price low.
We experienced how big the difference is between a DIY-Bookscanning person who's ok with a little fiddling and a "ordinary" person who's not. We want to make one scanner for both worlds. At the moment the drawings are just a big mess, which don't make sense without explanation.


BillGill wrote: ↑01 Nov 2017, 09:57 For a scanner without a platen, I'm not real sure about being able to reliably hold the book open flat enough to get a good scan without getting my fingers in the way. And if you don't get it open at least far enough for the camera to see down into the gutter even ScanTailor won't help. A lot of my books have pretty stiff pages.

Maybe the platen can be switched out for a "frame"? A u-shaped frame made from plywood, and with a cutout in the middle, big enough to show all the text, but small enough to press down on the very border of the page.

Yes, and I still think its a great idea, and also something I don't know any commercial scanners do?

Our latest idea to make accurate camera adjustment a lot easier is the following: 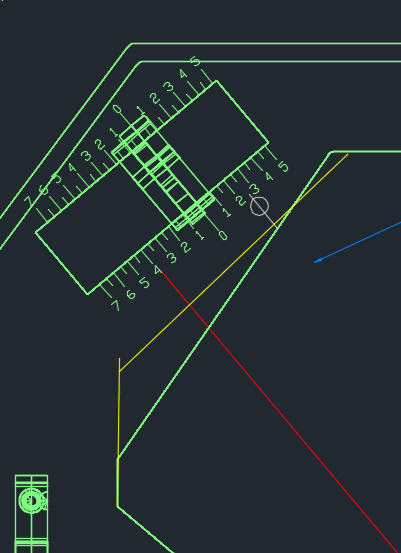 A scale which is lasered eight times (in every corner, top and bottom) on the imaging module front plate, alongside with an eccentric tensioner (also made from wood of course) which makes tensioning a lot easier.

The camera bracket will have eight indicators. When all indicators show the same point of their scale the cameras are perfectly aligned.
(As long as also the cameras position on the camera-bracket itself ist perfect (Which we may accomplish by one of your (@daniel_reetz) ideas ->3D printed baseplates for different camera models))

What do you think about that?